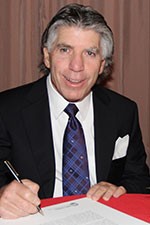 I met my wife Terry Z"L in 1979 and we were married for 23 years, until she passed away in 2006 at the age of 52 after suffering a massive stroke. Terry touched a lot of people. While she wasn’t a person who did charity work under a “normal” structure, she was charitable in that she was always very compassionate in helping people who had their own personal tsouris. Terry had a huge heart and was very giving. Both she and I would bring people to the house who had nowhere to go for Yontiff – people always seemed to latch on to her.

Terry loved the outdoors and together we did a lot of camping and boating. When I went boating with her in Georgian Bay she would go out and come back with fish wherever we were. I go to those same places now with my friends and it’s a struggle to get fish. Terry just had a nose.

Terry always felt that going to camp, being outdoors and getting away from the city was important and helped mould a person. As a kid she loved camp and then through her real estate business she was also involved in helping send kids to camp. So it was a very natural thing for me to start the Terry J. Moranis Camp Scholarship Fund to help send kids to Jewish summer camp.

Growing up, the value that was instilled in me was to give back and help the community – I saw that in my own household. As a child I was involved with telephone campaigns and I remember during the six-day war in 1967 I went around picking up cheques when there was an emergency campaign. I was also a volunteer in Israel in the Yom Kippur War. Then when the second intifada happened in Israel, my brother and I raised money for an ambulance for Magen David Adom. Between the two of us we raised about $80,000.

Through the Terry J. Moranis Camp Scholarship Fund I’m trying to help keep children in a Jewish environment – this is very important to me and it’s part of the way that I was raised. This is also a legacy to help keep Terry’s name alive.

As told by her husband, Hartley Hershenhorn