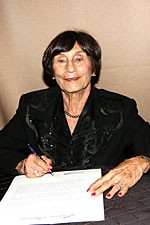 I was born in a small town in Hungary and had a privileged childhood, growing up in a large home and cared for by nannies, cleaning ladies and cooks. We were Jewish, though not very observant – we did not keep kosher and only attended synagogue on the high holidays.

That life, however, changed virtually over night with the German occupation in 1942. My father, then a successful businessman, was taken to the eastern front with the Hungarian army as part of a Jewish working detachment. We never heard from him again and later learned that he perished there the same year.

German troops seized our home and we were deported to Austria in 1944. When the war ended, we returned to Hungary, but in turn, were persecuted as part of the bourgeoisie by the new Communist regime.

Life was difficult and the future uncertain, until a handsome young man named Mozes (Leslie, Zeev) Laci arrived in our town. He survived deportation to Auschwitz, but lost his young brother, parents, grandparents and uncles in the Holocaust. He found a home in the Hanoir Hazioni movement. He was very devoted to Zionism and became a madrich, to organize and guide young survivors to immigrate to Israel. He was charismatic, charming and full of life and I and many of the young survivors of the town followed him to Israel. Soon after we were married, and had two great kids: Ofer and Oritte.

Leslie Mozes became a teacher on our kibbutz and I studied engineering at the Technion. I later received my PhD at the University of London, England and enjoyed a successful career as a chemical-environmental engineer in Israel and Canada, including 25 years at Ontario Hydro. Soon after our arrival to Canada, we had a new addition to our family: Anat.

I have always been committed to environmental causes. I have participated in numerous committees at the municipal and provincial, even international levels, and remain involved to this day.

While my environmental interests certainly influenced my decision to create the Leslie Zeev Mozes Memorial Endowment Fund, doing so was really my way of honouring my late husband. He not only taught me about Judaism and Zionism, he taught me how to give, to love and to work for the benefit of others. He changed my priorities and he changed my life, and for that I am forever grateful. This is the legacy he left to me, our three children and six grandchildren and with the creation of this fund, it is a legacy that will live on in our community as well.