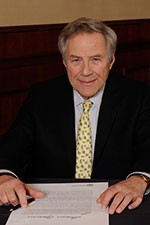 Some specific events and experiences through my early and middle life started my involvement with community.

Growing up in Forest Hill would seem very secure; however, I would occasionally be singled out for no apparent reason for an altercation. So I began to see the writing on the wall early on. Your good friends would strangely turn on you temporarily on learning that you were Jewish.

In the late forties, with the emergence of Israel, there came a distinct change, over time, in this attitude. Having a Jewish background then wasn’t much more distinctive in Toronto than having an Italian or Irish one. Nathan Phillips and Phil Givens became mayors.

There were people around me who had a major influence on me: in particular, my father, who was active in virtually all Jewish issues, along with his business. He founded Beth Sholom Synagogue, which at that time was the only mainstream platform in the north end. Later, in 1959 or 1960, we moved to Holy Blossom, with the arrival of Rabbi Gunther Plaut, who was well chronicled as a tremendous teacher and role model. In Toronto at that time, there were a number of colorful characters, community leaders such as Ray Wolfe, Phil Granovsky, Wilf Posluns, and others, who recruited younger candidates to take management roles.

Eventually, I became chairman of the Toronto UJA Campaign, for three terms, and president of the Jewish Federations of Canada — UIA, as it is known today. My main effort there was separating some of UIA's Jewish Agency projects in Israel into Canadian-managed programs, so that visiting Canadians could identify directly with them.

I was most influenced, on one of my many trips to Israel, by seeing groups of seventeen-year-olds taking their mandatory pre-army stress tests around the soccer field, while their parents watched with concern. Their contribution would be to eventually normalize our status in Canada and the Diaspora as a self-reliant people. Ironically, although anti-Semitism is no longer politically correct, anti-Zionism is the new cover.