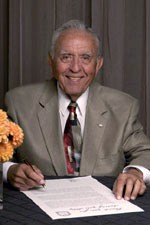 Born and raised in Hamilton, Ontario, my late wife, Alyce Orzy, grew up in a caring and traditional Jewish home, thanks to her parents Harry and Ida Gunter, both of whom personified the best in Jewish values.

Alyce was midway through acquiring a degree from McMaster University, which she temporarily postponed when we got married, and moved to Kitchener, Ontario. Despite the demands of raising three children, she was very active in our only synagogue, Beth Jacob, where she lent her talents in a number of ways, including several stints as President of the Sisterhood and contributing to planning and building our new Synagogue.

Following in her mother’s footsteps, who was once named Hadassah’s Woman of the Year, Alyce went on to found Kitchener’s second Hadassah Chapter, of which she became President.

Personifying tikkun olam – “repairing the world” — my wife’s love for children and her belief in the importance of Jewish education resulted in her personal campaign to arrange to have our Synagogue Sisterhood join the Women’s League for Conservative Judaism. Alyce devoted herself to this so that our Community’s children could attend their prestigious Camp Ramah and enhance a Jewish education beyond what normally is available in a small community.

Well-read, intelligent, and inquisitive when it came to the Torah, Alyce never lost her thirst for learning and was, in fact, in the middle of writing a book based on the Prophet Isaiah’s teachings, titled “To Plant Heaven” when she passed away.

I’m prejudiced but she was truly one-of-a-kind. She was very charitable, honourable, always available to help when the need arose, and an exceptional wife and mother. She wasn’t just a Jew by Fate, but rather a Jew by Faith.

Our family wanted to keep alive our memory of this truly selfless, generous and caring woman and we honour her by memorializing her name.