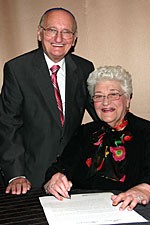 The Ostrovtzer Society was established in Toronto in 1924 and named after the City of Ostrowiec, Poland. With 38 members in that very first year, the focus was to provide friendship and assistance to our landsmen who left Ostrowiec and came to Toronto to start a new life. Ten years later membership approached 100 and the society had by then signed on a young Jewish doctor to provide medical services to the members and their families at reasonable cost. However the source for new members slowed due to restrictive immigration policy and the outbreak of war in Europe. Membership growth began again with the arrival of holocaust survivors from the ashes of the Jewish community of Ostrowiec and the Society was here to make things a little easier for our landsleit. In addition, the Society organized a young men’s branch for the sons of members, many of whom are now involved in the operation of the Society.

A little can go a long way. Whether it was a small loan, some medical attention or even just some friendship, the Society was there. Many of our members who came to Toronto with nothing soon became successful contributing members of our community. In turn, they stepped up and were there for others in need.

That was the spirit that defined the Ostrovtzer Society in its early days and throughout its history.

Throughout the years, our Tzedekah has been directed to many important causes. In recent years we have supported Israel, Baycrest Foundation, UJA Federation, Ve’ahavta and many more worthy causes. We continue to own cemetery land to ensure each member gets a proper Jewish burial. This has always been important to our membership.

We’re proud of our roots and what we’ve achieved over the years. A souvenir book created in 1954, commemorating the Society’s 30th anniversary, reads like a history book of Jewish Toronto in its very early days. Many of our members were involved in creating landmark institutions, several of which still exist today.

80 plus years is a long time. We know how important it is to remember our past, where we came from and all that we’ve done. It’s equally important to look to the future. With membership in decline, we now ask: how can we continue to make a difference and honour our values of Tzedakah going forward? How will we be remembered?

As such, we have decided to establish an Endowment Fund through the Jewish Foundation of Greater Toronto. It is our way of bridging the past to the future. The Ostrovtzer Society made a difference years ago when there was tremendous need – and we’ve done it the whole way through. Why should we stop now? We can still be part of the future.