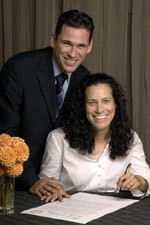 I still remember clearly the lessons imparted on me by my father Marvin and my mom Mary when I was a young child.

My mother is a Holocaust survivor who believed that if there had been an Israel earlier than 1948, the Holocaust might never have happened. She felt that the reason there's no Holocaust today, is because there is an Israel. My father Marvin, a Toronto basketball icon who was inducted into the Ontario Basketball Hall of Fame, believed strongly in treating everyone with an equal amount of respect no matter their standing in society.

Rachel's parents, Linda, a family attorney, and Stuart Alexander, a respected engineer who was involved in the Canada Space Arm, moved to Toronto from England when she was a young child. They both taught her the values of Judaism including tzedakah.

I too, learned the importance of giving from my parents. We always had a tzedakah box in our home and whenever we got our allowance, we'd put in what we could. Whenever someone would come to the door asking for money so they could feed their family, my mom would empty out the kitchen pantry and give the person a box of food. Even though my parents had very little, they always gave what they could.

We both were raised in very Zionistic families.

Rachel and I took those lessons to heart and established the Leonard & Rachel Pearl Family Fund through the Jewish Foundation of Greater Toronto.

Two causes we're particularly passionate about are children — we have two, Liam and Hannah. Obviously, creating a safe and secure future for children is paramount, thereby preventing another holocaust.

The fund will be used to help send young adults on the birthright Israel program and help provide food for Holocaust survivors living in Toronto.

We both feel that the major philanthropists who fund the program are, in a sense, today's modern day pioneers of Israel, connecting an entire generation to Israel.

Our fund will also help to ensure that no Holocaust survivor will ever again know the feeling of being hungry.

Rachel, a well-respected pediatric nephrologist and a tremendous wife and mother, always says that she does what she does because children deserve a safe, secure and healthy life and future, and part of that is achieved by giving back. That's why we both feel fortunate to be able to give to UJA Federation. We can't think of another organization that will make the best use of our donation.