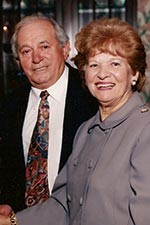 Being the children of Holocaust survivors is a significant part of our lives. It was a special feeling and a different upbringing than most of our peers had.

Our Dad, Nathan Z"L, was born in Bilgoraj, Poland, a wonderful shtetl which was the birthplace of Isaac Bashevis Singer. At least fifty percent of this thriving community was Jewish.

In 1939, the town was bombed by the Nazis. The Russians arrived, asking the Jews to gather in the town’s centre, explaining that the Nazis intended to kill them. The bombing of our Dad’s family home forced our Zaidie and Bubbie, Yisrael and Shaindle, along with our Dad and his sister, to leave. They spent the next six years in different parts of Russia; our Dad worked in various camps. Our parents married while in Russia. After the war, they were in a displaced persons camp in Austria, where Isaac was born. Dad worked for the U.S. Army as a car mechanic and chauffeur. Jewish survivors were treated well by the Americans, many of whom were deeply affected by what they witnessed when they helped liberate the concentration camps.

In 1948, our Dad, Mom and Isaac immigrated to Toronto, where Rachelle and Ronnie were born. Dad owned the Quality Bakery on College Street, with many customers claiming it had the best bread, challah and kaiser rolls in the city.

Dad saw his children and eight grandchildren grow up to have successful lives. He also enjoyed ten great-grandchildren before his passing in 2012. A man with a smile and a story for every occasion, he never got angry. He led a wonderful life with Mom, Freda, the love of his life. She still misses him dearly.

We know it is up to us to promote the idea of Never Again as a basic human rights issue. As the number of living Holocaust survivors sadly starts to dwindle, it remains the responsibility of their children and grandchildren to carry on their stories and their legacies.

Our father would be very proud that we chose to honour his legacy this way. The Holocaust was a major part of all of our lives as a family, and he would not want us to forget it. He would want future generations to be aware of it too. In honour of our Dad’s passing, we, along with our mother, decided to honour his memory by creating the Nathan Peck Memorial Fund, which will support the programs and services offered at UJA Federation’s Sarah and Chaim Neuberger Holocaust Education Centre.

As told by his children, Isaac Peck, Rachelle Switzman and Ronnie Peck