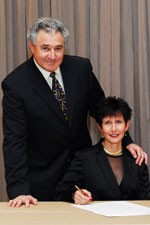 My parents, Solomon (Sam) Penn and Ann Tzveigorn, emigrated from Lithuania to South Africa before World War II, my father and his family in the 1920s, and my mother in the 1930s. My mother was the sole survivor of a large family, and after the war was only able to track down a few cousins who had escaped to Russia, the only known survivors of a large extended family.

I recall the stories of life in the Shtetl that I heard from an early age, my mother's family was poor, and the weekly sharing of one apple amongst eight children is an indelible image. It is from that image that my family's view of charity and sharing flows.

In the early days life in South Africa was not easy for immigrants. My father was a tailor and his first bed was a roll of fabric at the back of the store where he worked. My parents did what immigrants had to do to survive back then, work day and night with little time for anything else. As a result of their incredible strength and perseverance, I was fortunate to be born into middle-class comfort and privilege, the youngest of three brothers. Our parents gave their lives to provide the opportunity of education and a better life for myself and my brothers.

My parents experienced persecution firsthand, to them the word pogrom was not a word from a history book, but something to be feared. These experiences, together with the events of the war made them ardent Zionists. Israel was the only hope for the salvation of the Jewish people. The very existence of Israel was a wonder to them, and its failure to survive would mean the end of the Jewish people.

As difficult as life was for them they were always able to set aside something for others. As hard as they worked there was always time for community service. I recall the endless parcels of food, clothing and other necessities that my mother packaged and mailed to their cousins in Russia who were trapped behind the iron curtain until the early 1970s. And of course there was energy left to work for Israel. Although my mother worked full-time, helping my father in his business as well as tending to our family's needs, she made the time to work for a Hadassah group collecting for Israel. Her group made a substantial contribution towards the building of an orphanage in Israel.

It was not just Jewish causes that inspired them. Their experiences gave them a visceral understanding and empathy for anyone less fortunate.

And so we come to the year 2006 in Canada. How easy it is for us in this time and place. Tzedakah is no longer a heavy burden we must find a way to bear. It is privilege to have the opportunity to contribute.