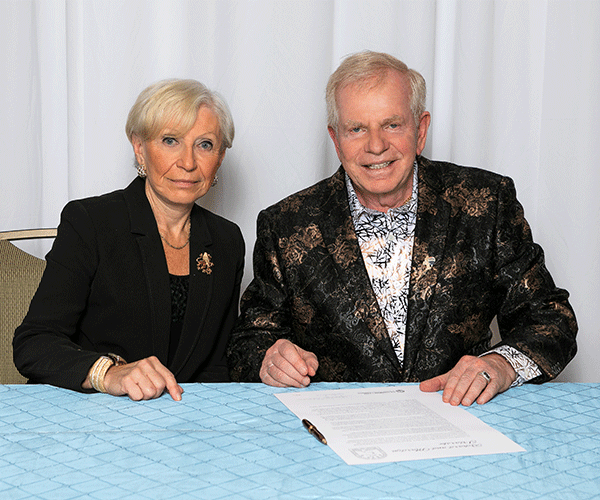 We were both born in Europe after World War II. Richard was in Lwow, Poland to Polish Jews and I was born in a displaced person’s camp also to Polish Jews. Our parents were all survivors. His mother spent the war hiding in a cellar. His father spent the war first in the Polish Army and then the Russian Army. My parents spent the war in Labor Camps in Siberia. All four endured unspeakable conditions.

We are both first-born children, bringing our new families hope and continuity. We also felt their pain. We had large extended families that instilled in us love of family.  Close aunts, uncles and cousins provided a safety net of support. They were but a small number of family that survived the war. We heard horrific stories of hunger, desperation and hardship. Life was frightening for all of them.

Richard lived in Poland until the age of 12. His parents were both important executives in major Polish corporations. The family changed their name. Although they had become part of the community, Richard’s father maintained that he was a Jew because of his heritage. His mother knew her Jewish roots, but in Poland it was better to blend. They immigrated to Barbados to join Richard’s father’s family. He moved to Toronto where he continued his education.  Always planning to leave Europe, my family left for Montreal when I was 18 months. My mother’s sister who was responsible for my mother’s survival, welcomed us. My father’s family had gone to the Bronx, New York where we eventually joined them. My father maintained his orthodox roots throughout.

Richard and I met in 1966 through my cousin and friends. We went to university together after we married in 1968. We had student loans and each other and were surrounded by family who loved us. We were the first to go to university. Richard became an electrical engineer and I became a high school math teacher. Education was very important to our parents and to us. Our four children are all university graduates and have made us very proud. We now have seven amazing grandchildren. Our lives are blessed with family, and love and comfort.

We also have a very successful business. I like to say we were an overnight success, but it took us 35 years of overnights. Our business is also a family affair. Richard and his brother Alex own the company. His brother, my brother and sister-in-law, three of my children, our niece and nephew also work with us. I also refer to our staff as my children. We are a large family who cares for each other, supports each other and looks out for each other. That is why we support UJA. We feel that the Jewish community is our extended family. We need to look out for each other.