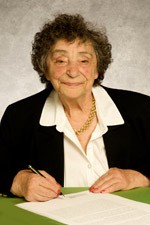 My life is divided into many chapters. Sadly, the early chapters are stained with haunting memories.

I was born in Poland in 1924 near the German border. When I was a teenager studying at an all-Jewish school, world events jolted me into a reality I will never forget, and hope no one else will ever have to experience. Germany declared war on Poland. Rules in our community became stricter and stricter against the Jews and, eventually, my family and I were put into a ghetto and then deported. I was separated from my family, never to see them again.

I was shipped to seven different concentration camps. Then, as the end of the war drew near, as I was being transported by cattle car toward Czechoslovakia, the train made a stop just outside Prague and we were let out for a brief period. Three young girls and I made a quick decision to hide in a nearby field and, eventually, made our way to a farm. We were taken in and the war ended soon after.

I was encouraged to go to Dresden and it was there that I met my future husband. He had fought in the Russian army and was a Prisoner of War. He was isolated from the death camps and assumed he was the only Jew spared. When we first met, he told me that he had thought all Jewish people had been wiped out. Clearly, he was mistaken.

We went to the Russian-occupied section of Berlin temporarily. Eventually, we made our way to Barbados, where all three of our children were born. Florence, Paulette and Sammy were our pride and joy. With our young family, we decided to immigrate to Canada in 1962. It was, and continues to be, our safe haven and we knew it would be a good place for our children.

I am thankful to the Toronto community for allowing me to be free – to practice Judaism, to support many causes, to be a part of many interfaith dialogues, and to be able to give back.

The earlier difficult chapters of my life cannot be erased. Thankfully, the more recent ones have allowed me to practice what I choose, support what I feel passionate about and, most importantly, to live free. And my fund set up with the Jewish Foundation will ensure that these principles are carried forward even after my final chapter is written.