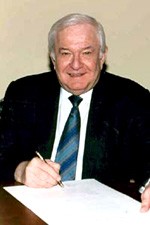 Supporting the Jewish community is a family tradition. It started with my grandparents, who, although they didn't have much money, never turned anyone away. It has continued with the Posluns family being involved in virtually every Jewish philanthrophy in the city.

I think it is our responsibility to support Jewish causes, and to convince other people to do so as well.

I believe in giving back to the community. The more I get involved, the more committed I become. We must continue ourwork here to support Israel, because not only is Israel dependent on the Diaspora, the Diaspora is dependent on Israel.

I take great comfort in knowing that my family will continue to live their lives with the values of Tzedakah that my grand parents and parents passed on to me. My son is active in the Jewish Foundation of Greater Toronto, and the Associated Hebrew Schools; my daughter Wendy is involved with the Jewish Foundation, UJA Federation as well as Hebrew University; and, my daughter Lynn is chairing the Baycrest Gala this year.

I am proud that my grandchildren are also moving in the right direction. All of them have been to Israel a number of times and have seen the projects that we support. They were educated through the Jewish day school system, and when they received their Bar/Bat Mitzvah gifts, each gave part to a charity oftheir choice.

It is our obligation to take care of our own community. When you do good deeds for others, you certainly get a lot back.