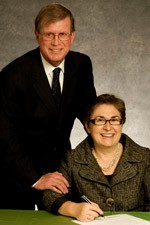 My wife, Leah, and I started out on our road to commitment to UJA from different places. Leah is a child of survivors of the Holocaust and was born in Israel. She has been a fervent Zionist all her life. I grew up in Toronto in a traditional household where Judaism was a religious and cultural imperative. My whole family was here, and had been since the 1920s, since my grandparents, escaping the hardships of Poland, created a good life in Toronto for their children and grandchildren.

In the summer of 1973, a few years after we married, we travelled to Israel together. I met many of Leah’s relatives, including her cousin, Shmuel, who had just entered the army. I was completely taken by the country, its people, and all that Israel stood for. I became as fervent a Zionist as Leah had always been.

Then came the Yom Kippur War. I was a resident at Mount Sinai. We were called in to a room and told about the terrible threat to Israel’s existence. We made our pledges then and there. I learned shortly afterwards that Shmuel had been seriously injured on the front lines. So many others died! I was determined to do everything in my power to help the cause, not only through personal donations, but also as a canvasser.

I became more and more involved in Toronto in the Annual Campaign, and we made many more trips to Israel together, often as part of UJA missions. Every Jew should be proud of how much Israel has accomplished in such a short time. Our children have continued our commitment, travelling to Israel on family trips, as well as on organized youth tours.

There is no doubt that a flourishing Israel is terribly important to Jews everywhere. Some people say that, if there had been no Holocaust, there would be no Israel. I say that, if there had been an Israel, there would have been no Holocaust! We, in North America, often forget, because it is so easy here, that Israel is a safe haven, and its presence in the world will protect us if we are in need, as it protected and saved the Jews of Syria, Ethiopia and Yemen.

Continuity, education, the centrality of Israel to our peoplehood, these are all part of what UJA fosters and supports. We are blessed to live here, in this wonderful Jewish community in Toronto, and to have seen the tremendous miracle of modern Israel. We hope that our children will preserve and nurture our desire to be involved in our community and with Israel.