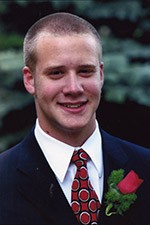 Jordan Propas was a well-liked, popular and positive young man who enjoyed life and was a good son, brother and great friend.

Jordan attended public school as well as Hebrew school as a child and participated in other activities including swimming, soccer, and music lessons. When Jordan was old enough, he went to overnight camp. Camp White Pine turned out to be a wonderful experience for Jordan. It was at camp, recalls Jordan’s father Lorne, where he developed important life skills, gained confidence and made many lasting friendships. He returned every summer thereafter, eventually becoming a member of staff, in charge of White Pine’s land sports program.

In 1998, Jordan’s mother Lolly was diagnosed with terminal cancer. In between treatments and when circumstances permitted, the family travelled and tried to make the most of every precious moment. At the time, Jordan was enrolled at Huron College at the University of Western Ontario studying Political Sciences. As he had done on numerous weekends throughout his mother’s illness, Jordan drove home to visit his mother one Friday in mid March 2001. Tragically, on his way back to London, Jordan hit a patch of black ice and lost control of his car. Jordan, a handsome, popular young man with a bright, promising future was killed. And so a family already coping with a difficult situation was now confronted with a shattering loss. Twelve days later, Lolly passed away.

Devastated by the loss of their beloved friend, eight of Jordan’s friends established the Jordan Propas Camp Scholarship Fund. They wanted to honour Jordan’s memory in a way that recognized the pivotal role summer camp had played in shaping his life and character. Jordan had a great appreciation for the summer camp experience, a love of teaching young campers, and a belief that the camp experience has long lasting positive impact on individuals. Jordan also strongly believed that each child should have the opportunity to experience summer camp. Therefore, the fund was set up to enable economically disadvantaged children to experience the joys of camp Jordan had so cherished. The fund, now administered by the Jewish Foundation of Greater Toronto, continues to grow and provide numerous scholarships to Jewish youngsters who would otherwise never be able to afford a Jewish summer camp experience.

March 17 this year marked the 10th Yahrzeit of Jordan’s passing and several of Jordan’s friends contacted Lorne and Jordan’s sister Brandi that day to remember Jordan.

Today, Lorne is the proud grandfather of Jesse Leib Kruger Propas born to Brandi and her husband Brad Kruger. Jesse is named after his uncle Jordan and his grandmother Lolly. Lorne and his family take comfort in the knowledge that through the establishment of the Camp Fund with the Foundation, Jordan’s love of summer camp will continue to be shared with many other children throughout our community for years to come.

As told by his father, Lorne Propas