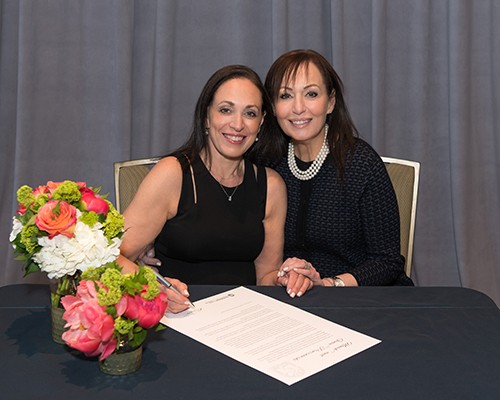 It is with pleasure that we honour our parents, Moniek z”l and Genia z”l Prusznowski.  They were born in Poland and survived the devastation of the Holocaust. Moniek was from Lodz, one of 6 children in a family of limited means. Genia was from the village of Szydlowiz, one of 7 children in an affluent family.  In spite of incredible losses, they each had a surviving sibling.  Moniek’s brother had emigrated to Israel before the war, and Genia’s sister survived the camps with her.

After the war, Genia lived in Fehrenwald Displaced Persons (DP) Camp, and started a small store.  One blind date with the dashing 98 pound survivor Moniek resulted in marriage six weeks later, a union that lasted 63 years.  Our brother, Bernie z”l, was born in 1948.  In 1949, with very little money, they came to Canada to join Genia’s surviving sister.

Our parents were ambitious and hard working.  Moniek, a master tailor, was able to shelve his pride and take on what was considered women’s work.  He worked all hours sewing piecework for a garment factory. They were able to save and put a down payment on a house near Kensington Market.  To cover costs, there was a boarder in each room.  We lived in the living and dining rooms and Genia cooked and cleaned for everyone. Resourceful Genia started Jean’s Bargain Store, and the upstairs flat became home.  Its success enabled Moniek to leave sewing and work in the store as well.  They opened a second store and working 6 days a week were able to move us to Bathurst Manor.

Our parents rose above their pain and trauma to give us a good life.  Despite their internal scars, they showed us love and joy.  Moniek with his exuberance and drive, and Genia with her foresight and internal fortitude were the driving forces in our family.

Our parents lived with integrity, honesty, and valued action.  We learned both the value of a dollar and the dignity of hard work. They taught us that no matter how difficult life was, internal strength would help you not only survive but flourish.

It is with pride that we share their story. They would have been honoured to know that their gift to the Jewish Foundation was being acknowledged in the Book of Life, and their legacy shared with the Jewish community of Toronto.