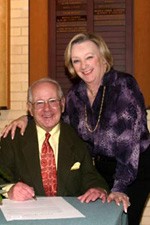 A defining moment for me as a Jew was the 1967 War. I was already 40 years old at the time and had never really felt very connected to Jewish life. With the exception of my Bar Mitzvah, my family didn't really participate much in Jewish customs or traditions. But in 1967, the idea that Israel may not exist woke me up. It was from that time forward that I became much more involved in the community and developed a more haimish feeling as a Jew.

Elaine, on the other hand, grew up in a family where Jewish tradition was part of every day life. She tells stories of her great grandmother's generosity. There was always a little something in her skirt pockets to give to others who knocked on the door in need — even though her own family had barely enough to eat. Ordinary Jews — yet they quietly showed extraordinary acts of kindness and generosity.

After the war, I decided to take the Young Adult Leadership course and over the years became more involved in the community in various volunteer roles, including leadership at Baycrest Centre, UJA Federation's Annual Campaign Chair and others.

We met many wonderful people along the way who were enthusiastic and so deeply committed. They further inspired our own feelings regarding Tzedakah and Israel, which we visited often.

There's much to do to ensure Jewish continuity. We established the Rafelman endowment because we believe it is important to ensure the future of the Jewish people. But we also believe that this is not instead of personal giving. It is equally important to give individually.

We share this message with our children and grandchildren. They know that it is not enough for them to count on what their parents or grandparents have established. They must step up on their own. It would disappoint us if they missed out on that experience for themselves.