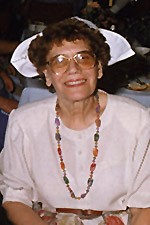 As an infant, my sister, Sara, made a delightful chirping sound so she was affectionately nick-named ‘Birdie’ by our grandfather. The pet name stuck for her entire life.

Much like a bird, my late sister loved to travel the globe. She journeyed to many exotic and far-off places including Israel. She was also quite fond of the arts — ballet, opera, theatre — and she loved to bake. Sara was an accomplished pianist, though she suffered from hearing loss. Despite her physical limitations, Sara/Birdie was a determined, sweet and kind individual who made certain to include charitable work in her life.

She was very active with Na’amat — known as Pioneer Women when she first became involved. She was a committed supporter of UJA’s annual campaign and visited Israel twice.

Both my sister and I never married so we were each other’s only immediate family over the years, living together until Sara passed away last year. Because we have no offspring, we decided that our estate should go to those who would appreciate and benefit from it the most. So, between us, we designated to a number of charities including the Jewish Foundation of Greater Toronto.

I attribute my sister’s generosity to my late parents, Jennie and Moses Ratney Z"L. They taught us the value of Tzedakah through their giving nature and their involvement in the Toronto Jewish community. They maintained Jewish traditions at home and were long time members of Holy Blossom Temple. Sara and I loved and respected our parents dearly.

Even with her challenges, Sara made a point to better the lives of others. She never complained, though she suffered from various illnesses. She was an introverted, quiet person but surprisingly comfortable speaking publicly. While she never revealed her personal strife, she made every effort to help others in need. My sister was very strong and her inclination to be giving and caring towards others will be perpetuated thanks to her bequest to the Jewish Foundation, which will continue to support causes that were important to her.

As told by her sister, Cecille Ratney.