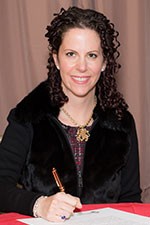 Being involved with community work was a significant part of my upbringing. Both my mother and bubbie volunteered within the Jewish community, and my father had a lifelong involvement with Federation.

My father, Bernie Herman Z"L, was my role model in all aspects of life, including philanthropy. He was involved in many different facets of Jewish life, in Toronto especially, but also extending to Israel. My father passed away two and a half years ago, exactly one week after his 100th birthday. I have most definitely been influenced by him to become involved in the Jewish community, to be passionate about it, and to give philanthropically.

Outside of my family influences, my love for the Jewish community and Israel was first infused at a young age, when I attended Holy Blossom Temple and Bialik Hebrew Day School, where my children are now students. Bialik instills a true passion for Israel, as evidenced by my son, now in Grade 3, who first began begging to go to Israel when he was in JK. (Our whole family made the journey last Sukkot).

I definitely try to pass on my Jewish values to my children. My father made a gift to the Lebovic JCC, but unfortunately he passed away before the structure was complete. My mother and I were invited to tour the new facility during its final phase of construction. It was very important to me to bring my children, not just for them to see the tangible gift their Papa had given, but also in order for them to gain an appreciation that many other community members had also chosen to give a significant amount of money back to the community in such a meaningful way.

Making a legacy gift to Federation that will continue in perpetuity was very significant for me. In a sense, it is a tribute to my father and his remarkable life. I wanted to contribute something more enduring than a one-time gift, and ensure the impact of my gift for years to come.

I have been involved with UJA for more than 15 years, and am presently in my third year of the North American-wide National Young Leadership Cabinet. I recently returned from a study mission to St. Petersburg, Stockholm, and Helsinki. My experiences on this trip have helped to reinforce one of my hopes for our Jewish community, which is to keep people engaged and ensure the next generations remain actively involved.

Our community needs to know the importance of Federation for what it does, not just in Canada and Israel, but around the world. Federation cares for people who would otherwise be forgotten, helps Jewish communities grow, revitalizes them, and helps ensure their strength and endurance.