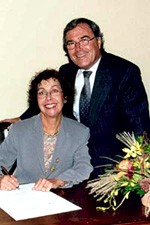 I've lived in Toronto all my life. My mother was always a strong believer in Judaism and my father was a very learned Jew with strong moral values. Our family wasn't wealthy, but we always contributed. From my earliest memories, the Keren Kayemet Blue Box was always a fixture in our house and my mother gave selflessly to anyone who asked.

Growing up, I had a Jewish education and went to shul. But it wasn't until the early '70s that I had my first major involvement with the Jewish community. In December of 1973, my partners convinced me to go on a one - week UJA Federation mission to Israel, even though it was the busiest time of year for us in the retail business. That trip was a huge turning point for me in terms of contributing time and money and I've been on many missions since.

I became active in UJA Federation, but I always felt strongly about following my own path. It was important to me to find what needed to be done in the community and to help and make it happen.

About thirteen years ago, I got involved in fundraising for the Princess Margaret Hospital and was instrumental in having the lobby named for my late sister, Toby. A few years later, I joined the board of the Bernard Betel Centre and worked with United Way to allow for development and expansion despite a serious lack of funds. Today, the facility is being revitalized, membership is growing and seniors are learning to connect with the world by learning to use computers.

It takes vision to foresee the needs of the community and perseverance to turn them into reality. Our community is building things today that will help continue to bring Jewish people of all ages together with a strong sense of identity. It's up to all of us to support that vision.

I grew up learning that giving was an obligation. I started both my own foundation and an endowment fund at the Jewish Foundation as a way to put aside funds so that I would always be able to deliver on that commitment. Based on what I've done, I've influenced my three children and I have every confidence that they will continue building this community in the future.