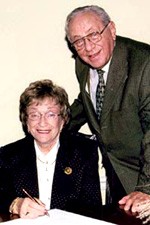 I am a Holocaust survivor. I came from a Zionist family in Poland — my father was a strong Zionist and my mother founded the WIZO chapter in the shtetl where we lived. My brother and I grew up putting our pennies into the Keren Kayemet Blue Box each week.

I came to Canada in 1948 when I was 21 years old, sponsored by family in Toronto. Coming here began the process of rebuilding my life — learning a new language and adjusting to a new lifestyle. The Jewish community of Toronto reached out to me, giving me a helping hand and a warm welcome wherever I went. In 1949 I brought my wife, Lily, also a survivor, to Canada from Germany, where I had first met her.

My education had, of course, been interrupted by the war and I had to figure out how to make a living. I apprenticed at a relative's printing company and then worked as a printer for the Globe and Mail. I could have had a steady career there, but instead I opened my own successful printing business. I became involved in the Jewish community mostly for business, but I also wanted to repay the community that gave me a new home and a new start in life.

Fifteen years ago I sold my business and retired. Since then I've had more time to devote to many Jewish community causes, including UJA Federation, JNF, Yad Vashem and B'nai Brith Canada, among others. I have served as the National Vice President and National Treasurer of B'nai Brith Canada and am still very involved with my local lodge, the Raoul Wallenberg-Yorkdale Circle Lodge. Right now I am the President of Jewish Holocaust Survivors of Canada, a group dedicated to seeking a measure of justice for survivors.

I have given a gift to the UJA Federation annual Campaign for many years, but as I began to think about the future, I established a fund at the Jewish Foundation. Over the years I've seen the fund grow. Lily and I have two daughters and five grandchildren who share our commitment to Israel, Jewish community and Jewish values. Now there will always be something that my grandchildren and great-grandchildren can point to and say “that was built by my grandparents.”