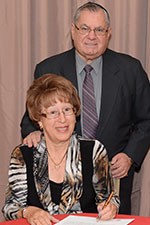 “Set your goals. Work hard to meet those goals, and be honest.”

Those were the values my father instilled in my brother George and me through his words and deeds.

Born in Montreal, Quebec, my father Pascal Rothman Z"L left school to help support his mother and siblings after his father died at an early age. Similarly, my mother began working for a mere $7 a week, when she was young, to help her family make ends meet. Her father would take $1 a week from her to deposit into the bank to start a savings account.

Suffice it to say, my parents struggled financially, as so many others did, during the Great Depression. Their indomitable spirits during those hard years has left a lasting impression on our own family; chiefly, the learned value of how to handle money carefully and responsibly.

Just as impactful were the Jewish values – e.g. the importance of a close family, education and celebrating the holidays – these were central themes in both of our homes while growing up.

My wife Barbara and I spent our honeymoon in Israel in 1968. That trip was the catalyst that opened our eyes to the needs of the Jewish people. Since then we have had the privilege of returning and doing some volunteer work. Our community needs funds to remain vibrant and vital. Barbara and I have been very fortunate in our lives and as such, we are able to make this contribution to our people. However, when we look around at the world today, we become concerned for future generations of the Jewish community both in the Diaspora and in Israel. We fear the next generation will have a more difficult time supporting the needy in our community due to the ever increasing cost of living, especially in Toronto, where making ends meet is challenge enough to young and old alike. This begs the question: “Who will look after the Jewish community in the future? If not us, who?”

Barbara’s father escaped from Germany just prior to the outbreak of the Second World War. Her family was helped by the tremendous efforts of members of the Jewish communities of England, Shanghai and Canada. Those Jewish communities, among others, reached out to assist penniless and scared immigrants and refugees looking to start a new life away from the chaos of their homelands.

Their experiences demonstrate to us all the necessity of a strong, unified Jewish community, able and willing to help the less fortunate.

Written by their son and daughter-in-law, Elliott and Barbara Rothman