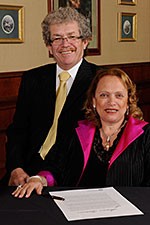 From the very beginning, our early lives followed parallel paths. We are both children of Holocaust survivors, both born within a few years of each other following the end of the war. We both lived in Israel when she was a country of much the same young age as we ourselves were, and we both came to Toronto as immigrants with our parents and siblings. It was at a B’nai Brith youth dance that our lives would finally intersect. We have been inseparable ever since.

We were very aware of the atrocity that our parents survived, but they were never able to share personal stories with us. We lived with very little knowledge of how they escaped death, and even after attempts to extract some information our parents would not speak of their most intimate, painful memories. Instead, they chose to share with us the short list of their family members who had survived, and the much lengthier list of loved ones who had perished. Despite this tragedy, our parents’ faith was not shaken. The Holocaust may have even strengthened their commitment to Judaism and its traditions. We were brought up with those values.

It has been important to us that our three children — Michael, Simon, and Sherri — all have the same Yiddishkeit infused in their lives that we did. Our children received supplemental Jewish schooling, were very active in BBYO and synagogue life, and have been involved in various community projects and communal work.

Recently, we became grandparents for the first time. When Paul was born to our daughter, Sherri, and her husband, Michael, we felt an incredible instant connection to this new life. It was very emotional and inspiring. Now that we no longer have our beloved parents with us, we feel the responsibility to be to Paul what our parents represented to our children — a vital link to our past. We are at the same time holders of personal family history and contributors to the collective Jewish family.

In 2008, after participating in the Adult March of the Living program, we gained a greater understanding of the work carried out by the organized Jewish community. That is when we elected to establish a fund in our children’s names, which we specifically asked that they manage. Our gift is meant not only to provide ongoing support to the community but also to allow our children to be active in the act of helping others, designating funds to causes that they feel most strongly about.