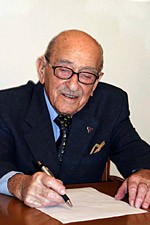 I am part of a generation that saw possibility and made it reality.

I was born in Russia in 1912. Pogroms and anti-Semitism were rampant so six months after my birth my parents, two older sisters and a brother and I moved to Canada.

My family first went to Winnipeg but, soon after, settled in Toronto, which has been my home to this day. We were a close family with modest means. Jewish tradition played a central role and I attended Heder - the only Jewish “parochial” school in existence at that time.

I was at U of T when the Depression hit in 1929 so I left U of T to look for a job. It was slim pickings, but I was resourceful and worked with a company that dealt with bankruptcy – an unfortunate but common occurrence of the day.

Through hard work, I established myself in the wholesale shoe business and later in real estate. In 1936 I married Jean, who was my beloved wife for over 60 years. We have three children: Marlene, Martin and Heather, nine grandchildren and eight great-grandchildren, which are the light of my life.

I thrived in a busy environment so my life was a juggling act of raising a family, committing to charitable work and attending to various business ventures. My wife and children were my staunchest supporters as my commitment to the Jewish community grew. They helped host countless parlour meetings in our home. My most memorable and perhaps most significant moment in my volunteer career was in 1956 when I chaired the United Jewish Welfare Funds’ annual campaign. I was invited to Israel on a special mission, which became the first Canadian UJA Mission, and had the privilege of meeting with David and Paula Ben-Gurion in their private home. It was a very significant time because, just days after my visit with Israel’s first Prime Minister, the Suez Canal crisis erupted and Israel was at war.

In addition to my long standing love for and support of Israel, my local commitments were of equal importance. I was President and Chair of countless organizations, too many to list. My greatest joy today is seeing what I was involved with — many institutions that were but a thought when I became involved — not only have come to fruition, but thrive. When I was a boy, there was no such thing as Jewish day school, let alone options in Jewish education, while today the options are vast, both formally and informally. The community has grown exponentially and I “shep nachas” from this. I can only hope that my support of the Jewish Foundation will enable continued growth – “MeKoach LeKoach – from strength to strength”.