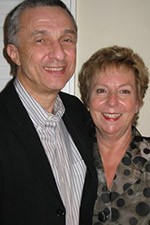 Honi and I both grew up in Toronto. We lived in the same areas, went to the same schools, had some of the same friends, but we didn’t know each other. In spite of this, our lives were much different. My parents were holocaust survivors. Honi’s mom was born in Toronto and her dad had moved to Toronto in his teens.

Honi and I had different but similar backgrounds. Honi’s dad was a successful businessman, one of the founders of Cooper Bros. Upholstery Company. As a result, Honi grew up with the trappings of an upper middle class family. Her parents belonged to Shaarei Shomayim; my parents davened at a hall. Her dad had a successful business; mine did alterations. Both mothers stayed home looking after their families. Both sets of parents instilled yiddishkeit and tzedakah in us.

Our parents always helped others, whether it was bringing family members to Canada, visiting the sick, giving money to the rabbis who rang the doorbell or just helping out neighbours.

Our families all come from Europe, specifically Poland. We originate from the Zachcinski, Szmulewicz, Kupferblum and Mijdanik families. The holocaust was not kind to our families. Thankfully, life went on and the family unit has grown since then.

Honi and I were married in 1972 and we have had a charmed life since. We are blessed with two wonderful daughters who have expanded the family tree with our sons-in-law. We are expecting our 6th and 7th grandchildren shortly.

We recognize that not all families in Canada, Israel and other parts of the world, are as fortunate as we have been. Tzedakah is very important to us and we feel it is incumbent on us to help others. Honi and I believe that fulfilling this obligation accomplishes three objectives. Firstly, those in need benefit. Secondly, you teach your children more by deeds than by words. Thirdly, it is a good feeling to help others. We feel good when we do so.