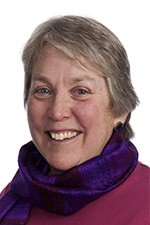 Both my parents, Benjamin and Estelle, had a strong sense of social responsibility that I absorbed as I was growing up. My father was a social worker and early in his career had a post at the United Service for New Americans in New York to help settle Jewish Holocaust survivors. He was deeply affected by their horrific stories of loss, and it was a step that would mark the beginning of his lifelong devotion to the Jewish community.

Before my family moved to Toronto in 1959, my father’s work that began in New York, brought us to Cleveland, Miami, and Boston. My mother was a strong supporter of my father’s work. Wherever we lived she made sure my brother and I were settled at school, started a new home, made new friends, and created a home where our friends were welcome.

My father was one of a few community leaders who established the Foundation side of UJA. This was a time when endowment funds were not commonly a part of charitable giving. My father believed that organizations needed the security that an endowment fund would provide in order to plan ahead to ensure future generations were served. My father and his colleagues broke tremendous ground in how donors can give for today and tomorrow which made a powerful difference to the Jewish community.

In my own life, I share in the belief that we must find ways to be of service to others. This value permeates both my work and life. As a psychologist and professor at the University of Toronto, I have advocated for gay and lesbian adolescents and young adults who so often find themselves on the outside faced with much adversity. More recently I am dedicating myself to another important area of mental health: the therapeutic potential for animals to foster wellbeing amongst people who face challenges such as mental illness, loss and grieving or just tough lives.

When my partner, Susan Rickwood, and I updated our wills we established an endowment fund because we realized it was time to think about legacy. Our fund will do two things: promote humane education for the prevention of cruelty of animals, and support outdoor education for youth by sending kids to Jewish camp who may not otherwise afford it. Some of my most cherished memories and life-long friendships were from my years at camp. My father, in fact, started his career in community service as a camp director.

Camp is a great place for kids to learn new skills, work together and have fun while being close to nature. Who knows – maybe camp can inspire kids to become our next community leaders. I believe that every child deserves to be able to go to camp and grow the way Susan and I did through that experience.