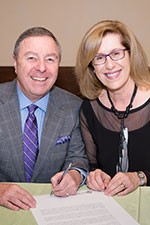 Lili and Michael have a history of involvement in the Jewish community. In Mike’s case that history goes right back to childhood, Young Judea, Camp Shalom and especially as a national youth leader in AZA-BBYO. A year spent in Israel in his late teens started a lifelong relationship with the Jewish State. Lili’s love of music and vocal talent, both somewhat underutilized in her lengthy career as a senior corporate banker, have been nurtured and grown through her close involvement with Jewish music. She is very active in several choral groups and especially with Lachan, the Toronto Jewish Chamber Choir. In order to better understand Jewish music and verse, Lili has been studying Hebrew for the past two years.

The past few years have seen both Lili and Mike ramp up their involvement in the community in leadership roles. Mike sits on the Investment Committee at Holy Blossom Temple, on the Professional Advisory Committee of the Jewish Foundation and was named Volunteer of the Year by Israel Bonds Canada in 2015. Mike also leads evening services at Holy Blossom.

Lili’s involvement with Baycrest and Mike’s work with the Jewish Foundation began to turn their thoughts to philanthropy and legacy. The passing of Mike’s parents, Trudy and Sam, in 2011 and 2012 brought those thoughts into focus. Together with Mike’s sister, Sheila Shain, and her husband, Allan Buckstein, the family set about creating an endowment fund in their memory at Baycrest. The exercise crystallized for them how such funds could meaningfully galvanize others into involvement.

For Lili and Michael the establishment of a charitable legacy through the Jewish Foundation gives them the ability to lead by example for their children, Jessica and Tim Usher-Jones, Ben Shain, and their new grandson, Theo. They see the fund as a living instrument that will take form during their children’s adulthood, giving them a chance to shape it and make their own tzedakah decisions going forward.

Jewish communities of the Diaspora throughout history have endeavoured to ensure that the vulnerable in our community, the sick, the poor, the elderly, would be looked after. Through the Jewish Foundation one can participate in this great tradition and fulfillment of Jewish values.