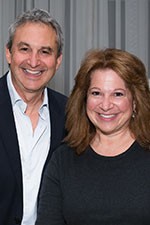 Our dad, Hush Sherman, loved life, and loved to laugh. And he ensured that his infectious joie de vivre would be written in stone after he left us in his ninety-fourth year. His instructions for the engraving on his headstone, which was adjacent to our mother, Sally’s, was to feature an arrow, pointing toward our mother’s name, with the message, “He Followed Her Everywhere!”

That was the example of a loving relationship that he left for his children, Michael and Cindy, his beloved daughter-in-law, Emily Rayson, and the grandchildren he adored: Shelby, Stephen, Alec, Sam and Jonathan. He and our mother were inseparable, always holding hands, always smiling, and conducting their life’s journey by making people happy.

One of the many ways they made people happy was by living a life of giving, both financially and of themselves. Dad’s insurance policy was set up as an annuity, with UJA as the recipient, because he knew that his gift would be much larger that way than if given during his lifetime. Baycrest, Mt. Sinai, and a Jerusalem-based nursing college, Michlala, also benefitted from our parents’ generosity over the decades. Dad was a huge supporter of the Out of the Cold program run through Holy Blossom as well.

That generosity did not just come from the pocket; it came from the heart. Dad never forgot a birthday, and well into his eighties, was a frequent and thoughtful visitor to all he knew, pushing the wheelchairs of friends in seniors’ residences who were younger than he was! Mom volunteered at the Leukemia Research Fund, and both were strong supporters of Israel; Dad’s criteria for voting in Canadian elections was always based on which candidate would be best for Israel!

Dad jogged through life, spreading joy with his music and jokes and optimism wherever he went. It was the small things that mattered most to him: sharing the fruits of his garden with his grandchildren, singing a happy tune, attending his granddaughter’s basketball game in his ninety-third year, and cleaning our car headlights with a tissue to keep us safe.

In a letter he left to be opened after his death, he made sure we knew that he felt he had “lived a great life.” And by every valuable measure, he did. For both our parents, family was paramount, giving to charity was expected, and their hearts and their doors were always open to all.