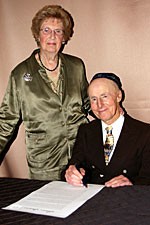 I’m a fragment of a rich cultural treasure that is a symbiosis of European German Jewry and British upbringing; I felt all my inheritances were cause for celebration.

Growing up in a one-parent household with our father, I ate no Jewish foods, had no Jewish friends, but had lots of Jewish relatives. We belonged to the West London synagogue in London and went to weekly children’s services until the outbreak of war, when my sister and I were sent to boarding school in the country. During school holidays we lit Chanukah candles in hotel bedrooms, away from the air raids in London.

Before the war, my father was able to get those relatives left in Germany out in time, notably his mother, and we began to celebrate Passover with Grossmama’s arrival. Over the many post-war years, my father helped support a wide assortment of relatives. After he died, I inherited some money and began the Max Ullmann Philanthropic Fund to perpetuate his name.

Another influence was my maternal uncle Seymour Karminski who was President of the Jewish Board of Guardians. My aunt headed several committees as well.

However, my dawning appreciation of Jewish tenets, history and literature stemmed from post-marital reading and study, entirely due to the influence of my husband Boris, who was brought up in an Orthodox household and attended parochial school in Germany from whence he was lucky to come to England. Later, I bought and read books for our congregation’s library.

A good doctrine has been given me. I want to pass on to our children and grandchildren the concept, not of choice but “obligations without number,” of giving of one’s time and one’s money to help others - Jewish values enhanced by my social work background. We must use our historical memory to keep us merciful.

The Jewish community must continue for all time. Not only do Jewish values have so much to offer the world, but because we must not give Hitler a “posthumous victory.” (Emil Fackenheim)