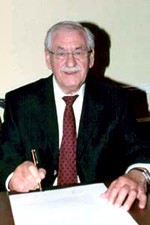 I was born in Lithuania and came to Canada when I was six. My father, a cattle dealer, came before us and settled with relatives on a farm in Northern Ontario. He brought me, my mother and another brother there in the winter of 1928. After one mid-February night on that farm with no electricity or running water, my mother insisted on moving to the nearest town!

We moved to Englehart, Ontario — population 1,800. There were only six Jewish families and a few other Jewish kids. My own family made up 40% of the local minyan! Sometimes I would head to Kirkland Lake or Timmins to participate in activities with other Jewish kids.

There were not many opportunities for Jewish studies in Englehart, but we did have a shul — an old white united church. The community brought in a shochet and rabbi for holidays and everybody chipped in according to his means.

I was married during World War II, but divorced shortly after. I've been a confirmed bachelor ever since. I never had children of my own, but I helped raise seven wonderful nieces and nephews.

After Englehart, I lived in Edmonton, Kitchener, and finally settled in Toronto in the 1960s. I got into the optical sales business, which meant I spent half the year travelling extensively. I often spent Pesach on the road, enjoying wonderful hospitality in different communities.

My Jewish community involvement was very limited, but I've always had a great love for Israel. Since 1967, I've visited my cousins there almost every other year, usually at Purim.

A few years ago, I decided I wanted to give something to the Toronto community. I established a fund, which now pays for two young people in foster care to travel to Israel each summer. So far, about six or seven kids have made the trip.

In some ways, I feel I've gotten more out of this program than the recipients. I feel very good that they have the opportunity to enjoy such an important experience. Someday, my niece, Marla Kessler, will take the program over for me. I know that my fund will always be there to help a few special kids enjoy Israel each year.