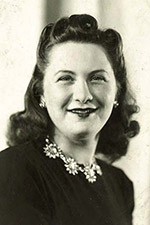 My mother always encouraged me to be creative; to seek out a life and career grounded in the arts. It was this passion (and priority) that ultimately led to the development of the Leah Shopsowitz Fund at the Jewish Foundation of Greater Toronto.

When Lillian, (also known by her Hebrew name of Leah), passed away in 1984, I was designated the executor of her estate which included a non-allocated $25,000 sum. How this money would be invested and distributed was left up to me. I turned to Jack Orenstein, a family friend and then executive director of Beth Tzedec, for direction. Jack connected me to Rabbi Irwin Witty, then director of the UJA Federation Media Centre. He took me for a tour, introducing me to the vast media collection on Jewish topics from around the world – and thus, the seeds for the Leah Shopsowitz Fund were planted and brought into the light.

The first project we funded helped to create an archival film of Holocaust survivors detailing their personal accounts of wartime experiences. The tapes have been used for research purposes by teachers, researchers, historians and others and the format became the template for Steven Spielberg’s Film & Video Archive at the United States Holocaust Memorial and Museum. Needless to say, it was a powerful and successful beginning.

Over the years, this small fund has supported films dealing with a wide variety of Jewish topics that have aired on CBC, Vision TV and been featured in the Toronto Jewish Film Festival. Given her love of the arts and Jewish culture, I know that my mother would be proud of all that her fund has accomplished.

The Leah Shopsowitz Fund is the only one of its kind at the Jewish Foundation, dealing with Jewish film and video. It is my hope that this important fund will continue to grow and broaden its reach, helping us to share stories that might otherwise go untold.

The Leah Shopsowitz Fund is not only my mother’s legacy, but a legacy for our Jewish community.