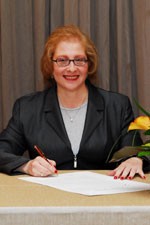 I grew up in Montreal and did not have much affiliation with the Jewish community there. As a child, I attended synagogue on a weekly basis but my family observed this custom mostly out of respect for my grandfather who was quite religious and lived with us. When he died, we slowly let go of the tradition that previously existed in our home.

My parents worked very hard to make ends meet. We lived modestly. But they always found something to give when the Jewish community came calling. And I did the same, independent of my parents. Giving tzedakah was a natural practice in our home.

I moved to Toronto when I was in my thirties and, by sheer coincidence, landed a job with the federation. Only after I began working at UJA Federation did I become more involved as a volunteer and truly aware of the scope and reach of the organization.

Recently, when I made a decision to draft my will, I had no offspring with whom to leave my estate. I did not want some stranger deciding where my money should go. I made the decision to inquire about setting up a legacy in the form of an endowment with the Jewish Foundation of Greater Toronto.

I was interested in having my endowment directed to help children. The foundation suggested a project in Israel that matched my request. I wanted to be sure that someone, who is in need of support, could benefit from what I have. That really makes me happy. To have my name attached to something purposeful gives me a profound sense of fulfillment and assures me that something I chose will have guaranteed funding.

Having set my endowment with the Foundation, I am confident that there are young people out there who will have a chance in life because of my gift.