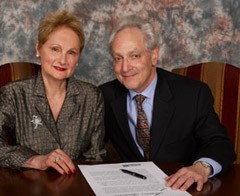 We are a couple committed to working for the well-being of both the Jewish community and beyond. In this, we are guided by tikkun olam — “repairing the world.”

For both Susan, born and raised in Winnipeg, and Murray, in Montreal, Jewish values were a guiding force.  Murray was inspired at an early age by the years of service his late mother dedicated to Montreal’s Jewish General Hospital. He in turn worked with the JGH’s social services department and the Allied Jewish Community Services.

When we moved to Oakville in the 1990s, we joined Temple Shaarei-Beth El in order to become acquainted with the small but vibrant community there. As a result, we not only made lifelong friends, but also became active in the congregation, singing in the choir. During that time, Susan, as an adult, studied for and became a bat mitzvah.   Returning to Toronto a few years later, we continued to pursue our love of Jewish liturgical music as members of Temple Emanu-El’s choir.

Murray, a retired investment professional, sits on the finance and investment committees of several Jewish organizations.  Susan's extensive human resources career has been applied to much of her volunteerism.  Through JIAS and independently, she mentors immigrants in English conversation, networking, and job search skills. She is an active volunteer at Temple Emanu-El, leading morning minyan and shiva services, and chairing their Music Committee. She has served on their Board as well as that of MAZON Canada, a Jewish Response to Hunger.

All these influences led us to endow our gift to the Jewish Foundation, marrying our passion for music with Jewish causes. Our legacy will be to know that we have given back to our community in a meaningful way.