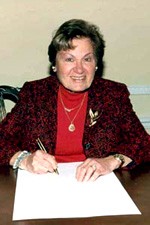 I was born in Toronto in the 1920s. I grew up on Palmerston Avenue, with my parents and a house full of siblings. My parents came from Europe and worked hard, making many sacrifices to provide for us. We were poor, but the importance of family and education were always stressed.

Throughout my teens, I loved school. I attended Hebrew and Yiddish schools, and graduated from Harbord Collegiate with a full scholarship to the University of Toronto. I dreamed of becoming a teacher, but felt the full sting of anti-Semitism when I was warned that there were few jobs available for Jews. I earned my Bachelor of Arts and worked for an insurance company until I was married.

My husband, Philip, was a holocaust survivor. We met on a "blind date." I thought he was terribly intelligent and handsome. Needless to say, he captured my heart, and we were married in December, 1949. Because of what Philip had endured, a strong sense of Jewish community was further instilled in me. We were not religious, but yiddishkeit and education were important to us. We raised three daughters, all pursuing professional careers.

For Philip, tzedakah was also important. Even in Poland, he was involved in Zionist and community activities. For 20 years, he was president of the Chenstochover Aid Society in Toronto, which did charity work and offered free loans to those in need. He brought many young people into the Society and inspired me to get involved.

In 1986, I helped found the Chenstochover Sisterhood. Since the first fundraising tea which was held in our home, we have raised over $50,000 for causes in Israel. Philip and I travelled to Israel often, and gave annually to UJA, Beit Halochem, Na'amat Women and Baycrest.

Philip passed away in 2003, but during his life he made a substantial contribution to our community. In his honour, I donated to the Wolfond Centre for Jewish Campus Life at the University of Toronto. A memorial plaque rests outside the director's office, bearing Philip's name.

I am very proud to be Jewish and I truly believe our community will stay strong always. Through my contributions, I trust I have set an example for my six grandchildren, and for the whole Jewish community for generations to come.