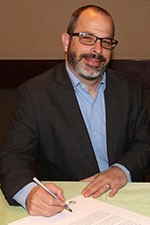 My father often introduces me to people as his son the lawyer and the teacher but I chose to do neither. We laughed at this jab for a long time but only in the last year do I think my father came to truly grasp what it is that I do and, more importantly, why I pursued such a worthwhile career.

I have been working in the Jewish community for nearly 25 years. I was always deeply connected to Zionist and Israel based programs, largely due to the many summers attending the only Canadian Maritime Jewish/Zionist overnight camp, Camp Kadimah. My parents took me to Israel for my Bar Mitzvah, further fueling the Jewish flame inside of me. I lived in Israel twice, first for my final year of high school, as my father was on an academic Sabbatical there, and then I returned to teach at The Walworth Barbour American International School, where I was a student a few years before.

I was involved with Israel Experience from the mid 1990s and was privileged to be a leader of one of Canada’s first Birthright Israel trips back in 2000 (and I led many trips after that). In that time, I was also working in small communities around Ontario, as far as Thunder Bay, helping with outreach as well as Jewish and Holocaust education among their younger population. Eventually I become a fundraiser as well.

My work culminated when, in 2003, I was asked to take over Canada Israel Experience. In that role, I was responsible for bringing almost 50,000 young Canadians to Israel and, in some cases, Poland, for highly impactful Jewish, educationally-based programs, among them The March of the Living and Birthright Israel.

Fast forward 12 years and I am, again, about to embark on another chapter in my Jewish journey, as I am leaving my position to pursue other but equally meaningful work in the field of Experiential Jewish and Israel Education.

My family, colleagues and committee volunteers chose to honour me with a fund that will support professional development for emerging professional leaders working in the Canadian Jewish community. This fund truly captures everything I have worked for in my own career. I have always been a strong advocate for attracting, retaining and growing young professionals. I want them to understand that working in the Jewish community is a meaningful, viable and legitimate career option. I am honoured that my fund will support these amazingly young and talented professionals working their way up in this most rewarding field.