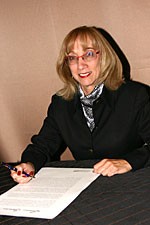 I grew up in Calgary as part of a large and loving family – the Switzers – my mother’s mishpucha. My father was an only child whose parents lived in Regina until their later years when they too made their way to Calgary.

Mine was a Jewish home and community where tzedakah and tikum olam were practiced, taught and expected.

My mother’s family was involved in many Jewish organizations including the Calgary Jewish Polish Loan Society, the Southern Alberta Jewish Historical Society and their community’s chevra kadisha. They gave of their time as though it were an honour to help those in need. Despite being seriously disabled at the age of 28, my mother was an active volunteer, participating in the PTA, the synagogue’s Sisterhood, Hadassah and National Council of Jewish Women to name a few.

Following their example, I became involved in my community at a very early age. In Grade 4, I organized a Red Cross Club in my classroom. By junior high I was active in Young Judea and in high school I was a leader in BBYO. I organized conferences, special events, fundraisers and attended BBYO conventions across Alberta and Saskatchewan and eventually in Wisconsin.

There is a story that my grandfather, Meyer Switzer, often told, that greatly influenced how I’ve lead my life. When he, his wife and baby daughter arrived in Montreal after a long and difficult voyage from Poland, a landsman greeted them and gave him $5 for the journey west to Calgary. Meyer asked the man for his address, intending to repay him once he had earned some money, but the landsman’s reply was simple: “Don’t pay me back, just help the next Jew who needs help.”

I want my children and grandchildren to learn the kindnesses of my Zaida, his vision of “pay it forward, not back,” and the important role of tzedakah in Jewish life – in our values and deeds. I am committed to leaving a legacy and providing for our Jewish future.