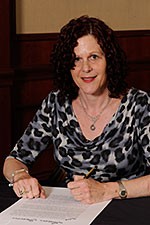 I have always been a staunch supporter of Israel. It is in my blood thanks to the intense connection my parents and their parents always had to being Jewish, as well as my having witnessed the establishment of a Jewish state.

My parents, Sylvia Z"L and Marvin, were both born in Poland but came to Toronto within the first few years of their lives: my father, at the age of three; and my mother, when she was just nine months old. They always knew the privilege and comfort of a relatively tolerant society, compared with the horrifying pogroms and anti-Semitism that forced their families to leave Poland. They maintained a Jewish home and upheld many traditions, all the while supporting charitable causes and, most notably, supporting Israel.

A momentous Jewish event for me was when I became a bat mitzvah. My mother insisted that my twin brother, Steven, and I both be afforded the same honour of an aliyah. My mother was very strong-willed and very persuasive. I not only had the opportunity to participate in a significant Jewish milestone, but I also made history by becoming the first bat mitzvah at Toronto’s Adath Israel Congregation!

The next Jewish milestone that resonates with me even today was when I was eighteen. I visited Israel for the first time. It was just following Jerusalem’s unification, after the Six Day War, when I travelled all over the country. I was completely overwhelmed by the wondrous sites and incredible people. I was so overcome with emotion and inspiration that I went back many times after that, made aliyah, and even married a Sabra.

I now live in Toronto, and am the proud mother of two grown children — Sari, thirty-three; and Gidon, twenty-nine. Both have been educated in Jewish day schools, are perfectly fluent in Hebrew, and have visited Israel countless times. They are very entrepreneurial in their professional lives, and I attribute that to the influence of their parents and grandparents. They are also very Jewish minded, and I am confident that they, too, will always keep Israel and Judaism at the forefront of their lives.

My commitment to the Jewish Foundation is my way of ensuring that Israel and our community continue to receive support so that they can thrive. It is also my way of encouraging others to do likewise. I often think about, how much more Israel could offer the world if it did not have to invest so much in its defense. My support, along with that of so many others, will at least help alleviate some of that pressure.