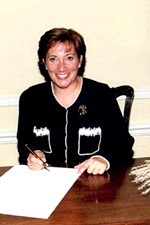 Like my mother, I was born and raised in Montreal. My dad was a Holocaust survivor - something he rarely spoke of, but it affected him throughout his life. My parents always gave what they could financially and raised my brother and me with strong Jewish values, particularly caring for others.

It was my grandparents who had the greatest Jewish influence on me. To them everything was about Israel and the Jewish people. I see that most now, looking back, and it's made me realize just how important legacy is. At 17 I made my first trip to Israel — a life-changing experience that made Judaism even more important to me.

In 1977, I married my husband, Jay, and moved to his home town of Toronto. It was a difficult transition at first, but once we had our daughter and son, I became involved in their schools and we joined Temple Sinai, which has had a tremendous influence on my life. I didn't have a lot of Jewish knowledge, but I love to learn, so I started taking courses. One day I wrote a letter to the Temple board and the next thing I knew, I was on a committee! Today, I'm very involved in the Reform movement internationally and I still study on a weekly basis.

I didn't know much about UJA Federation at first, either, but a phone call asking me to get involved eventually led me to take on roles as Chair of Women's Campaign & Advocacyand Vice-Chair of the Annual Campaign. I became a Lion of Judah in 2000 and have since endowed my Lion of Judah gift. My children know what tzedakah means to me, but I made this decision so future generations will understand and continue that legacy.

Today, I am actively involved in the Canadian Council for Reform Judaism, the UJA Federation Board, Israel Bonds, Hebrew University, Temple Sinai and CHAT. My involvement and my Jewish learning have certainly influenced my giving. I thank God that I'm able to give as I do…but I've definitely gotten back far more in return.