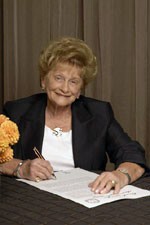 Give back to community and remember where you come from.

Those words were always in David's heart — and in his actions. He was a Holocaust survivor and experienced the unspeakable. His entire family perished in the hands of Nazi horror in Bialystok, where they lived.

After the war, he rebuilt his life in Canada, where we met, married and raised our own family together. But despite the good years that ensued, he never forgot. How could you? And while he couldn’t speak much of his past, he did everything he could to live and honour his family’s memory and the values they lived by.

Early in our marriage we had an opportunity to establish a fund to support a JNF project, “The Guardians of Arava” in memory of David’s family. It was important that his parents, Abraham and Elka Sud, and his siblings, Yezhak, Ben-Tzion, Chavat and Belka, be honoured and remembered.

It was particularly special because it supported Israel. We visited several times and could never get enough. We loved Israel. We need Israel. It needs us. It’s so important to support this beautiful country we, the Jewish people from all over the world, have the privilege of calling our own.

Although, I was raised in Toronto with very Jewish values and traditions, it was through David’s encouragement early in our marriage that I first became involved with UJA. “It’s important to be involved and give back,” he’d say. Over the years we gave back in many ways and to many organizations. To us, it was a blessing and a privilege to be able to do our part.

Our life together was blessed. We have four sons and five grandchildren. We’ve always tried our best to teach our children to carry on the Jewish traditions and values we inherited from our own parents.

Give back and remember where you come from. These words are the underlying spirit of the “David and Martha Sud Endowment”, which we hope will continue to give for generations to come.