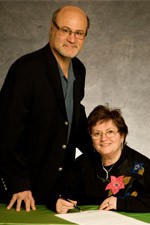 Miklos z”l and Ilonka z”l Szabolcsi left behind a legacy of generosity, compassion, music and a profound love for one another and the people in their lives. They helped their friends and donated generously to numerous causes, but did so discreetly and quietly, without any fanfare.

Miklos was born in Hungary, as was Ilonka. They both managed to survive the Holocaust. Unfortunately, Miklos’s parents and his siblings did not survive. In 1957, Miklos moved to Toronto, but sadly, his first wife died of cancer at a relatively young age. During a return visit to Hungary in 1970, he met Ilonka and married her in Budapest and, subsequently, brought her to Toronto. She became the new love of his life and he cherished her deeply until his death on June 27, 2001.

There is a good deal to celebrate about Ilonka. She was strong, savvy, and had a great passion for music. She was an accomplished and professionally trained, award-winning pianist, winning some prestigious awards in competitions in Europe. She taught many young people an appreciation for music at Western University, as well as within the community where she gave numerous private lessons. ‘Even if you had no previous talent’, she would confidently say ‘anyone can learn and enjoy the gift of music.’ She had the knack of bringing out the pianist in anyone who was willing to learn.

Another one of her passions, as well as cats, was her love of cooking, especially Hungarian dishes. A one hour piano lesson often turned into many hours of chatting, good eating and companionship. Her friends, as well as her students, loved to spend time with Ilonka as she was a very good listener. She knew how to nourish their souls as well as their stomachs.

Despite their sizeable wealth, the couple lived fairly frugal lives.

While they had no children of their own, family was still a high priority. After Ilonka’s mother passed away, she had her mother’s body shipped from Hungary to Toronto to rest in peace here and brought her father to Toronto to live with them.

Miklos and Ilonka were both active in the Hungarian Jewish community and many of the members became an integral part of her extended family.

Upon Ilonka’s passing, we all learned that generous sums of money were left to support many important causes - medical research, Israel, music, and people in need. Miklos and Ilonka Szabolcsi touched countless lives and made an enormous difference to many people while they were on this earth. Their legacy will long be remembered, and they will surely be rewarded in the hereafter for all they have done.

As told by Lorne Propas and Susan Barth