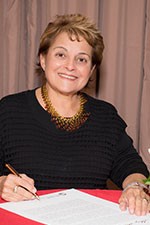 My sister Shirley Z"L was an extraordinary person. She was a woman of her own mind and her own way, with no time for anything petty. She was incredibly warm, exceedingly generous and passionately dedicated to her family, her community and many wonderful friends. She was truly an eshet chayil.

Shirley exemplified the powerful example set for us by our parents. Along with our younger sister, Avivah, we grew up in an observant home in North Toronto. Our father was an accountant, religious and fiercely loyal to family and friends. Our mother was a bookkeeper, an independent thinker and a confirmed atheist!

Our father was very involved in the community and believed passionately in tzedaka. Our mother almost never set foot in shul, but she kept a kosher home built on Jewish values. As a working mother, she showed us what women could accomplish. Shirley followed in her footsteps, becoming a bookkeeper and working with our parents.

Dick Trim was a client of my father’s. He was a Dutchman who came to Canada without a word of English. Dick was not Jewish, but his family had risked their lives to save Jews during the Holocaust. Even though he was 14 years her senior, with three sons from a previous marriage, Shirley was smitten.

They married, had a daughter and lived a life of tremendous adventure. Though Shirley was very practical, Dick was a dreamer. With kids in tow, they left Toronto behind and set sail on a 50-foot catamaran he built himself. Theirs was far from a traditional home, but Shirley never wavered in her identity as a Jew. Dick was always very supportive of that.

Although she went on to become a successful real estate agent, Shirley was not a woman of great means. Nonetheless, she gave as generously as the wealthiest person — quietly, with incredible humility and dignity. None of us ever knew just how much she did.

We lost Shirley to pancreatic cancer in 2011. I worked with the Jewish Foundation to establish a fund in her name. It was very important to me that she be remembered and linked Jewishly. The endowment will benefit Jewish Vocational Services, a cause she believed in.

Like Shirley, the fund is modest, but it will have a lasting impact on many people. I can’t think of a better legacy to commemorate her life, her values and her Jewish soul.

As told by her sister, Karen Goldenberg