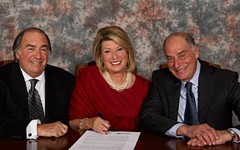 "Just as my ancestors planted for me, so shall I plant for my descendants”
Tractate Ta’anit 23a, Babylonian Talmud

Jack and Celia Ungerman grew up in large, close-knit families in downtown Toronto. Raised to respect elders, revere family and honour Jewish tradition - values that shaped and guided the pair throughout their lives - the couple also shared a ‘forward thinking’ philosophy, constantly looking to the future.

Before getting married, Celia Grossman graduated from Central Commerce and worked as a bookkeeper. Jack served in Canada’s Armed Forces then worked in his family’s poultry business. As his younger siblings came of age, Jack and an older brother made room by establishing their own poultry business in a different location. While their traditional Jewish up-bringing impressed upon them the obligation to help others, the Depression years forged their appreciation for honesty, hard work and the value of a dollar earned. Years later, when Jack was able to take early retirement, he and Celia continued as they had throughout their lives: they lived modestly, but gave generously.

Though regular contributors to the UJA, Mt. Sinai Hospital, Baycrest and numerous other places - both local and Israel based - the couple always gave quietly, without fanfare or public recognition. For many years, Celia was an active member of the Sisterhood at Beth Shalom Synagogue, where Jack attended services and served on the Shul’s Brotherhood. They enjoyed hosting traditional Shabbat and Yom Tov dinners and loved spending time at their summer cottage in Muskoka.

The Ungermans were blessed with three married children: Marvin & Sharon; Bernie & Monique and Elayne & Irwin Wortsman. They derived tremendous pride and joy from their nine grandchildren and seventeen great-grandchildren.

Their marriage was a long and happy partnership and the two were enormously grateful, not only for having found one another, but for having been granted lives blessed in many ways. As an expression of their gratitude and in recognition of their long-standing commitment to the values of Tzedakah and community, the Ungermans left generous bequests to several key institutions of which the Jewish Foundation of Greater Toronto was one such recipient.

In years to come, should there ever be a question as to how proceeds from their Endowment are to be allocated, we need only heed the instructions they gave years ago to a fundraiser who once asked: “is there anything in particular you want your donation used for?” They replied: “Use it wherever it’s needed most.”

May the beautiful legacy of Jack & Celia Ungerman Z"L, continue to inspire their descendents and forever be a source of blessing to our community.