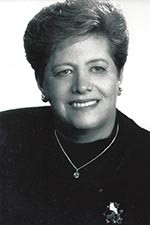 Didi was born in New York City on April 1, 1943, and raised in Miami Beach, Florida. In 1962, she crossed the border into Canada to live in Toronto and begin a journey she could not have envisioned.

In 1963 Didi moved to Sault Ste. Marie, Ontario where she became part of the tightly knit Jewish community comprised of forty families. It was during her years in the “Soo” that Didi learned first-hand the meaning and importance of community.

Returning to Toronto, Didi devoted much of her life to the local Jewish community, as well as to Jewish communities around the world. She was committed to ensuring a strong, secure and prosperous Israel. Throughout her years of serving the community, Didi participated in many conferences and conventions. These opportunities allowed her to connect and reconnect with leaders from other communities. She participated in, and attended, workshops and programs which highlighted themes relevant and common to all Jewish communities. She looked forward to such experiences and was enriched by them. Attending conferences embodied so many of the things that were important to Didi: altruism, an eagerness for learning, a deep sense of communal duty and a passion for travel. Establishing a fund in her memory to foster the leadership development of women within Toronto's Jewish community seems a fitting tribute to her life and work. The fund will help deserving activists to participate in the kind of events that meant so much to Didi.

Of all her leadership positions and titles, the ones which held the most meaning were that of mother and grandmother.

“Didi’s Girls” – Judith Urbach, Debbie (Avi) Mishaly and Tammy (Matthew) Zaldin are moved beyond words to have an endowment created with the Jewish Foundation of Greater Toronto that honours their mother, recognizes her contributions and celebrates her life.

As told by her daughters, Judith, Debbie and Tammy