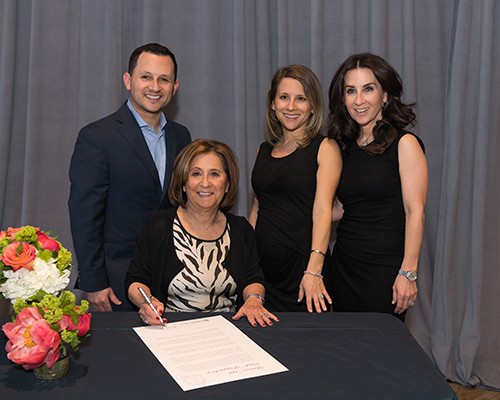 Shortly after my beloved mother passed away in 2014, my children and I set up an endowment fund to honour her memory, as well as the memory of my late father. Together, they left us with a tremendous legacy that we wanted to have memorialized in a meaningful way. Both were Holocaust survivors who lost many family members, friends and loved ones in the war. However, despite the tremendous heartbreak and devastation they had endured, they found each other after the war and were married within a matter of days. Soon after, I was born in Lodz, Poland. As a family of three, we eventually settled in Toronto.

Zenek was a trained tailor. His skills and determination to create a better life helped him to establish a successful coat manufacturing business. As was the case for most new immigrants setting up a new life, before success there were struggles. Zenek and Yadzia never forgot this and throughout their lives they made sure to always help others in any way they could. Their belief, along with so many of their fellow survivors and dear friends, remained: there will always be someone who needs more than us.

My parents directed their time and financial support to numerous charitable initiatives. They were founding members of what is now the Lodzer Centre Congregation (Lodzer Synagogue) and Zenek’s tremendous contributions are recognized on a plaque at the entrance of the Synagogue.

For this loving and haymish couple, we established the Zenek and Yadzia Wajgensberg Memorial Fund, an endowment fund benefitting the Neuberger Holocaust Education Centre of Toronto. If they were capable of giving back after everything they had endured, then there is no reason why we can’t also.

My father passed away unexpectedly in 1987. It was devastating for our entire family, but my mother had the support of her close friends and her family: me, her only child, my husband, Stanley, and her three grandchildren, Gillian, Jared, and Regan who meant the world to her. She also had the great fortune to meet and develop close relationships with two of her great-grandchildren.

My parents’ kindness and generosity, along with their determination to rebuild their lives after enduring the Holocaust, are key elements of their exceptional legacy that we wish to keep alive for many more generations.