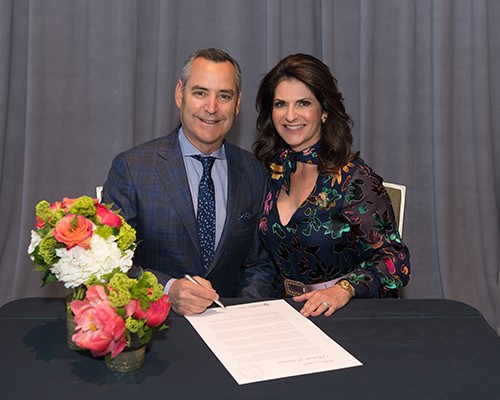 We were both born and raised in Hamilton, growing up as part of a small, tight-knit Jewish community. As children we both attended the Hamilton Hebrew Academy.  Being connected to the Jewish community was a way of life. The whole community would rally around fundraising events such as the Hadassah Bazaar, UJA telethons, and USY programs. Our families set an ongoing and everyday example of giving and actively participating in the Jewish community.

Both sets of Terry’s grandparents came over to Canada between the two World Wars, working hard to provide for and bring over the extended family from Europe.  Terry grew up as part of a very warm Jewish family but was aware that, as a Jew, he was a part of a minority that was not always liked by others.  Watching Israel fight the Six Day War imbued Terry with an even greater sense of responsibility to stand up and be proud of his Judaism.

Nadine’s paternal grandparents and her father were Holocaust survivors. Her maternal grandparents owned and operated a kosher butcher shop on Harbord St. in Toronto. Growing up with an awareness of this heritage deeply impacted Nadine’s perspective of Jewish history, the Holocaust, tradition, and philanthropy.  Being connected to the community and contributing to meaningful causes has always been very important to Nadine.

A sense of community and Jewish pride are core values that have shaped the everyday practice within our family. While raising our two daughters, Samara and Raquel, we made sure all family members placed coins in a tzedakah box before each Shabbat dinner, we travelled to Israel many times, both individually and together, and we were and continue to be involved with community organizations such as Hillel, The Association for Soldiers of Israel, and Friends of Simon Wiesenthal Centre for Holocaust Studies.

Both of our daughters graduated from Bialik and then CHAT.  Our family created and donated the Bialik Tree of Life donor wall to acknowledge, encourage and provide all graduating students and their families an opportunity to show their thanks and sense of belonging to the Bialik Family. Now that Samara and Raquel are young adults, we are proud to see that they have embraced the importance of living with Jewish values and the responsibility to give back within their own lives.

Giving is a reflection of our ideals, and it is a way to show gratitude for the good fortune of our upbringing, education, and community. We hope that our gift will impact future generations, and help to safeguard the Jewish values that sustain the community.