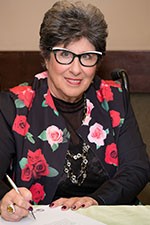 My introduction to tzedakah took place on Sunday mornings at my grandparents’ home. Until I was eight years of age, we lived with my maternal grandparents, David and Mircha Landau in their large family home on Hillcrest Drive. I saw a group of little men with beards calling on my grandfather every Sunday morning with their hands out. My grandfather never refused any of them.

He was a member of Shaarei Shomayim on St. Clair Avenue and, later, Beth Tzedec – albeit he continued to attend services at Shaarei Shomayim – and was generous to both. And, when Rabbi Monson asked for funds to build Beth Sholom, he was the only non-member to donate to this fund. My grandmother, through her dress store, often supplied the fashions for shows to raise money for various Jewish charities. As I matured, I saw my parents, Louis and Reta Blumenthal, also contribute to various charities.

My own philanthropic activities have been shaped by my experiences, education and career choices as I matured, and eventually made use of my acquired learning in many fields. I was lucky – and the harder I worked, the luckier I was – which enabled my philanthropy. I feel lucky that I have been able to “pay it forward”, as I was taught by my family.

I have an eclectic variety of charitable interests ranging from the welfare of children, economic empowerment, human rights and Israel. I donate to causes that appeal to me – from scholarships and multi-cultural get-togethers for university students, to holiday dinners for Israeli soldiers without families, to sending children to camp through UJA in memory of my late husband, as well as supporting various hospitals and health causes.

When my husband, Harold, was alive, we opened a fund at the Jewish Foundation of Greater Toronto in both of our names; later I opened one with my daughters, Adrienne Weinrib-Wolfman and Nicole Weinrib-Prussky, called the Weinrib Women’s Fund. The two funds were merged and I continue to contribute every year.

Rather than giving gifts to clients, family and friends, I make donations in their name to a charity that I believe will please them. It gives me a wonderful feeling of satisfaction to know that I am doing my best to protect my children and grandchildren, and the world they will one day inherit.