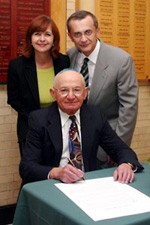 I grew up in a very observant home in a small town in Poland.We were a family of 10, not rich and my parents were very strict. When the war started, other than my eldest brother who came to Canada in 1936, I was the only member of our family who escaped to the former USSR. At that time, being young and alone, I lost touch with Jewish life. I married a woman with whom I had three children, the first being born in the USSR. As soon as the war ended, I returned to Poland, my birth country, had two more children, and started to organize my life. Since the USSR, and Poland were now communist regimes, there was not much Jewish life for those Jews who survived the Holocaust, but I did manage to send my eldest son to a Jewish school. Later, Jewish learning was abandoned and again, I lost what I was brought up with. I divorced my first wife and she returned to the former USSR and took the two younger children with her. I remarried and my youngest son, Mark, was born in Poland.

We came to Canada in 1960, and I realized that what had been missing from my life, was my Jewishness. I embraced our heritage by having my sons circumcised and leading them in Jewish lifestyle and religious observance. My youngest daughter was born here and I sent her and Mark to Jewish day schools to ingrain Jewish life in them. I kept these three children together and through outthe years kept in close touch with my other two children — one of whom has recently joined us in Canada.

At every opportunity, I remind my children that we are Jewish and of the importance of our Jewish community, from conducting the Passover Seders, to attending Synagogue on High Holidays, and celebrating Bar and Bat Mitzvahs. Regarding tzedakah,I always give what I can to Jewish and other community causes. I am proud to be Jewish. I sing in the Toronto Jewish FolkChoir, I belong to a mutual benefit society, and even at the young age of 87, I continue to attend and enthusiastically participate in community events. I fight for Jewish identity and whenever possible, I help out our beloved homeland of Israel. I am pleased to be able to share my story, and honoured by my children and grandchildren's commitment to the Jewish community.