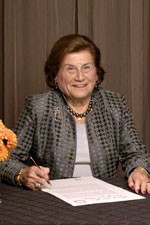 I have experienced some remarkable events in my life – some very personal and some very public. And with each experience I learned to be stronger and more mindful of my Jewish commitments.

It began in Germany in the early 1930s. My parents saw the writing on the wall for the fate of the Jews so we left for Palestine. Not long after arriving there, my mother died. I was only nine years old and would be taken in by my extended family, but I never truly experienced or appreciated the relationship between mother and child.

I did, however, grow up in the ultimate Zionist environment. After all, I lived in Palestine in the 1930s, 1940s and 1950s and was a member of the Haganah, fought in Israel’s War of Independence and, along with all soldiers and Jewish civilians, was compelled to defend our people’s right to a homeland. It was a monumental event.

Soon, I would marry Bob Abrahami, a volunteer Mahal soldier from England, who had come to help set up the military hospital system for our emerging new State. In 1952, I gave birth to our first child, Leonora, the first Jewish child to be born in Ashkelon in 2000 years. A few years later, due to my husband’s work as one of the founders of the Israel Bonds organization, we moved to the United States where my son, Gilad, was born. Seven years later, we picked up again, and moved to Toronto. I accepted each new surrounding and adapted well, thanks to my childhood and young adult experiences. But nothing could have prepared me for Bob’s sudden death in 1967, just two months after Israel’s Six-Day War.

I was left a very young widow with two children and was completely beside myself. What was I to do? I had been teaching Hebrew at United Synagogue Day School (USDS) and Beth Tzedec evening schools. Thankfully, I had a tremendous support system of friends and, looking back, that was probably my first experience that illustrated the warmth and compassion of Toronto’s Jewish community. I’ve called it home for almost 45 years. I also met my second husband, Louis Weisfeld, in Toronto and we were married for 25 years, until his death in 1996.

It was Louis who introduced me to the breadth of activity that makes our community thrive since he was involved with so many charitable institutions and hospital networks. Because of my teaching experience, I joined Associated Hebrew Day School’s board of directors. The world of philanthropy played a large role in my life and included, in particular, Bar Ilan University and the myriad channels of United Jewish Appeal, United Israel Appeal and its Israeli and local connections.

At this time in my life, I am even more involved – setting up endowments, scholastic fellowships, youth Aliyah in Israel, WIZO and most of all, connecting with those I am helping. I get no greater satisfaction then to hear about “my students” progress in their studies… but also in life.