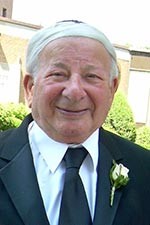 Our father, Ernie Weiss Z"L, was born in Mad, Hungary in 1928. He described his orthodox Jewish family as being poor in material possessions but rich spiritually. He was the eldest of seven children and remembered that they were always hungry, cold and afraid.

In 1944, the Jewish community of Mad was taken to Auschwitz/Birkenau. In the selection lineup at Auschwitz he saw his family (except for one sister, Bluma, who was hiding in Budapest) sent to the right while only he was sent to the left. He never saw them again.

Dad came to the United States as a war orphan in 1947. The Jewish Federation of Rochester, New York, provided him with room and board, an education and an allowance “big enough to take girls on dates and save for a car.”

In 1952 he married our mother, Rachel Hirschberg, a new immigrant from Brazil, and settled in Toronto. They had four daughters and he was a doting, committed and patient father and grandfather. For Dad, everything revolved around family. He had no greater joy than sitting at the Friday night table, sharing stories and telling jokes.

Quiet and humble, Dad was the gentle patriarch to all who encountered him. People felt safe with him, that he was a man they could trust, who would not judge them. He knew how to listen and lend support, how to find the best in others. He never raised his voice or uttered an unkind word about anyone. Everyone loved him.

Dad always said that he couldn’t wait to retire so he could sleep late. But on the first day of his retirement, he became a full-time volunteer. “This community has given so much to me – now it is time to give back,” he said. He spent most of every day volunteering at many different organizations in the hope that he could “do some good”.

One of his “greatest pleasures and greatest pain” was speaking to students about his Holocaust experiences. He was a dedicated speaker with the Sarah and Chaim Neuberger Holocaust Education Centre for more than 20 years. He message to students was always the same: “You must fight racism, intolerance and hatred and protect the freedoms of this great country, Canada.”

In 2008, Dad returned to Auschwitz with two grandchildren as part of the March of the Living. It was one of the most meaningful experiences of his life. That same year, he published his semi-autobiographical novel and was honoured by the Premier as a Holocaust survivor who had made a great contribution to Ontario.

Dad passed away at home on January 7, 2010. People still approach me to say that Dad made them feel special. He would have been embarrassed by the praise. He saw himself as a little man just trying to make a small difference in the world – one good deed at a time.