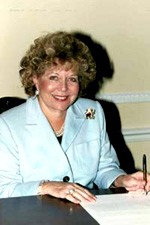 I have always considered myself to be a professional volunteer. Is it any wonder? My grandparents and parents gave my sister Wendy Eisen and me a most wonderful legacy: commitment to the Jewish community.

I clearly remember my grandfather Joe Herman's zeal for the Jewish National Fund and my grandmother Rose Herman's enthusiasm as she bicycled around Jackson's Point selling tickets for her Deborah Chapter of Hadassah-WIZO Tea. Grandma was a founding member of the Mount Sinai Hospital Auxiliary, and shared many stories with us about the first meeting held in her home.

Both my parents continued the tradition of Tzedakah throughout their lives. My father Bernie Herman was the first Chairman of the Board of York Finch Hospital and held that position for fifteen years. Among the many wonderful memories of my mother Allie, was her devotion to community service. Mom was an active member of Ruth Chapter of Hadassah-WIZO for over fifty years and chaired the Hadassah Bazaar. She was the first Gift Shop Chairman of the Mount Sinai Hospital Auxiliary as well as an active canvasser for UJA.

I have been actively involved with many charitable organizations for the past four decades. When I was a bride at 19, forming a Hadassah-WIZO Chapter was as natural as roasting chicken for Friday night. Forty-eight years ago, my mother helped me found Noar Chapter. I became its first President with her as our mentor. I continued to follow in her footsteps — as President of the Mount Sinai Hospital Auxiliary from 1983to 1985, and as a past Co-Chairman of the Lion of Judah and Atarah divisions of UJA Federation.

As the present Co-President of Israel Cancer Research Fund, I am involved with an organization, which supports groundbreaking, innovative cancer research conducted by outstanding scientists in numerous institutions in Israel.

This year, my sister, Wendy and I, are co-chairing the Prime Minister's Club Division of the State of Israel Bonds, Women's Campaign. We will be introducing an exciting and innovative way for women to participate in the purchase of Israel Bonds.

How fortunate I am, to be able to help make a difference in this world.

Le Dor V'Dor — from generation to generation —I hope my legacy will serve to remind my children and grandchildren and future generations to carry on what has been so important to me, the continuity and strength of the Jewish community.