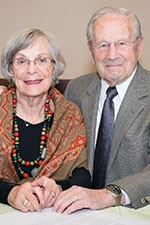 From as early as Al can remember, being outdoors and being active featured prominently in his life. Al and his older brother were often left to their vivid imaginations when looking for activities to occupy themselves while their parents, turn-of-the-twentieth-century immigrants, worked hard in their dry cleaning store in downtown Toronto. Al saw no disadvantage in this. In fact, these circumstances set the stage for where his life’s work would lead.

In high school, Al was one of a very few Jewish student athletes and he played football. His coach was involved with an overnight summer camp for disadvantaged youth. He offered his players the opportunity to be counselors for no pay. But as Al learned quickly, the compensation was the priceless experience of learning the benefits of camp and the invaluable reciprocal relationship between campers and counselors. The experience decided his fate: camp would become his professional ambition.

It didn’t happen linearly. Al was just beginning university and he opted to study physical education. And in the midst of this he met his life partner, Marg. As he began teaching, he also gained experience in the camping world, partnering with a friend and fellow camp enthusiast at a city day camp.

Fortunately for Al, Marg also attended overnight camp so her appreciation for it was shared. Incidentally, she too was the daughter of European immigrants and also lived above her parents store in Toronto.

By the 1960s, a wonderful opportunity presented itself: Al was offered the chance to purchase a lodge-converted-camp called New Moon. He had worked at a number of overnight summer camps, in addition to the city day camp, and with his teaching career at the high school level, his experience with young people was well established. The deal was made.

Now, a generation later, Al and Marg have not only established a highly regarded and long lasting brand in the camping world, but it has remained in the family with their son, Jack, and his wife, Sue, at the helm. All three of their children have served the community in the healthcare field: Judy, as an occupational therapist at Baycrest, Len as a research scientist for the Federal Government and Jack as a professor for University of Toronto.

Marg and Al raised all three of their children at camp and each of their grandchildren attended as well. It remains a tight and cherished community to Al and Marg and their greatest joy is running into a long line of alumni everywhere they go. Their endowment with the Jewish Foundation is an extension of their love for community and their desire to always help others and provide opportunities.