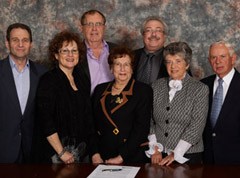 Before World War II, Chmielnik, Poland, flourished with Jewish life. The city had 10,000 Jews, which represented eighty percent of the city’s total population. It was home to libraries, newspapers, trades, businesses, yeshivas and synagogues. The value system of the Jewish community was centered around family, tradition, religion, Tzedakah and remembrance. The members of the society established themselves here in Toronto to honour the families and traditions of the people of Chmielnik. Before the war, the people of Chmielnik had a warm and traditional life which the war interrupted. Later on, this warmth and vibrancy was re-established when they settled in Canada.

The essence of the Chmielnicker Society in Toronto is about remembrance and passing on our values and legacies to future generations. A new, younger generation is just beginning to emerge, and in order for the people of that generation to fully comprehend who they are, as descendants of Chmielnik, we must retell the stories of our predecessors and share the richness of Yiddishkeit that was central to theirs and our existence. Establishing our fund with the Jewish Foundation enables us to document our society’s purpose. It preserves the memory of so many we’ve lost and it keeps the Chmielnicker name alive for eternity. The Chmielnicker Society was started in a building in downtown Toronto before the Second World War, as a mutual benefit and burial society. Joe Finkelstein was the original founder. At first, it functioned to help fellow landsmen in need, but as years went by, it became a centre for social activities while continuing to assist with charitable causes.

Our society’s main event every year is the Hazkarah – which always takes place on the first Sunday after Simchat Torah. This was the day, during the Shoah, that the infamous selections were made, the day Chmielnik ceased to exist. Many were deported to Skarzysko-Kamienna or Czestochowa and ultimately Treblinka. We gather on that particular day to honour the memory of those we lost but also to celebrate the endurance of our community. We hold a very special and emotional remembrance ceremony, which now includes the 3rd and 4th generations of Chmielnik descendants. Out of respect to their parents and grandparents, the younger generation is now attending the society’s Hazkarah and meetings. Everyone feels bonded together as one large extended family. We are there for each other to celebrate and to mourn. The first generation — newcomers to Canada — created the legacy of the Chmielnicker society; the 2nd generation was told, again and again, stories of the home town and, in turn, are charged with the responsibility to retell the stories and pass them on to their children and grandchildren. The original members felt that they were not supposed to have survived. But they did, and they want to be sure their children and grandchildren know how special the people in their hometown were and hope that they will continue to live their lives in the principled way their elders did. We must not forget.